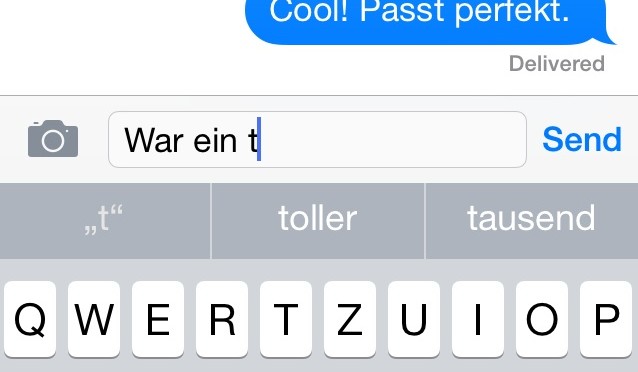 I upgraded to iOS 8 yesterday. Besides the fact that I was slightly disappointed (it looks exactly the same, how boring!), I became a little bit upset after typing the first message. I have read about the new keyboard’s contextual word suggestion, yet I wasn’t aware what that actually really meant.

The phone happily suggesting words above the keyboard was distracting me from what I initially wanted to write. And I caught myself altering my intended sentence structure in order to go with a suggested option from the phone. That was when I realized that this probably isn’t so good. Surely, the phone has already influenced my life and behavior in many ways. Smartphones and technology changed the way how we communicated, from rarely to always. But now technology started to interfere with what I wanted to say.

The medium always influences the message (length, depth, intimacy etc.) in a certain way – but now it starts to change the actual meaning. How convenient, we might think as we are happily typing along, using a word that wasn’t exactly what we initially wanted to say but somehow saves us a few extra seconds. Do that a few more times and you end up with a completely changed sentence. You end up saying things you might not want to say. While Autocorrect was clumsily “correcting” your typos (and led to a whole new kind of entertainment), iOS 8 now deliberately puts words in your mouth.